VVT is the English abbreviation of Variable Valve Timing. The cam position of the camshaft of the traditional engine is fixed, it is synchronized with the phase of the engine crankshaft, that is, the opening and closing angle (timing) between the intake valve and the exhaust valve does not change.

Therefore, the best It is difficult to achieve the best high-speed performance at the same time with the low-speed valve timing of the ”, that is, it is impossible to balance the needs of idle speed stability, low-speed torque output and high-speed output. In order to solve the different requirements of the engine for valve timing in the high speed and low speed range, a variable valve timing (VVT) system is adopted. The hydraulic actuator (VVT phaser) is installed at the front end of the camshaft, and the hydraulic pressure is controlled electronically. Ways to change the phase of the camshaft relative to the crankshaft to advance or retard the valve timing. The VVT ​​phaser and camshaft assembly is shown in the figure below. 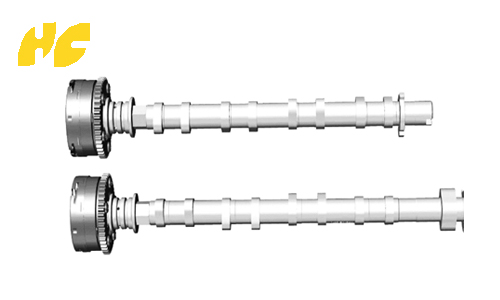 At present, most gasoline engines are equipped with various types of VVT systems. Especially for engines with higher emission standards, they are equipped with dual VVT mechanisms (intake and exhaust camshafts are equipped with VVT phasers). In fact, the VVT ​​system meets the needs of different working conditions and achieves the corresponding technical indicators by changing the valve overlap angle. In general, it has the following advantages:

(1) The phase of the intake and exhaust camshafts can be adjusted, which can be increased through regulation. The valve overlap angle increases the engine air intake.